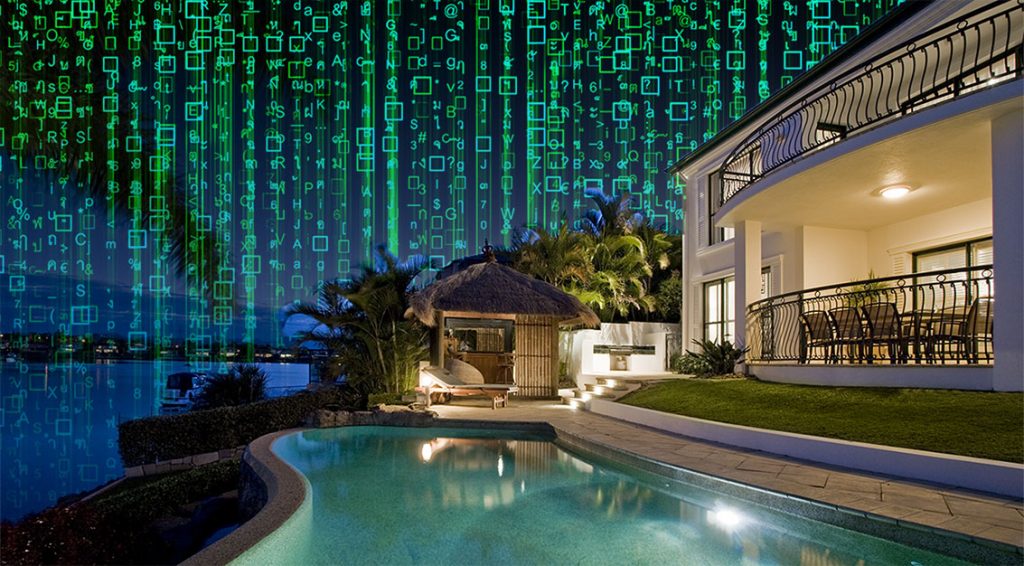 Facebook is redefining the traditional farm area with data

It’s been a monster week for announcements from tech giants when it comes to real estate.

Facebook has entered into Australian real estate (and real estate the world over) in the most agent friendly manner we’ve seen in a while – handing the power back to agents when it comes to marketing properties digitally.

Meanwhile Amazon (in the USA at least), are doing their bit to help agents generate business and leads with a new referral system based (seemingly) on merit.

But the impact of these announcements actually runs a lot deeper than just another headline about an industry shake up.

In fact what Facebook’s offering brings to the table is a pairing of automation with laser-like targeting, something that LJ Hooker have picked up on and are now looking to capitalize on in a major way with their latest technology offering for their agents.

While I’m not going to get into the nitty gritty of their offering, what I will say is this – they’re saying all the right things and for all appearances demonstrating that they understand the value of data.

One core part of a recent article on the Real Estate Business website says it all:

Mr McTavish said that the built-in intelligence of the system allows it to ring-fence and retain its intellectual capital.

“With most digital outreach campaigns, you’re handing over data which is ultimately used by that digital service supplier or portal in other campaigns.

“Data is the lifeblood of any agent and introducing third parties dilutes the current and future potential of the data, and even worse, leakage of data…..”

“Data is the lifeblood of any agent…” That’s it right there, your future, your profit, your career is in your data. It would seem that LJ Hooker understand that intimately and are doubling down on it- and rightly so.

As we move forward in this new technological age, data is king and most importantly it will be data, not geography that is the primary factor in defining your “Farm area.”

That’s not to say geography won’t play a part, lets face it, few agents want to drive 3-4 hours to list and sell a property, but the once strict geographic boundaries will become very very blurred.

Already agents have the ability to capture and consistently re-market to anyone who comes into contact with their content, website, videos, Facebook page and or apps. Once they’ve been captured they become part of your “digital patch.”

The digital patch concept is one that employs a number of the tools within the Facebook marketing platform to turn your ads, content, website and videos into a beacon for interested buyers and sellers. Once they’ve engaged with your ads/content/website/videos, they’re part of your marketing patch for at bare minimum, the next 6 months. This will give the agent power to advertise not just via Facebook but essentially have their ads follow their potential client all over the internet and social space.

Set up correctly, it allows an agent to turn every listing, every piece of content, essentially everything they do in the digital space, into a lead magnet. 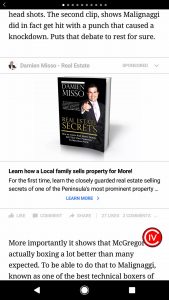 Damien Misso’s digital patch allows his brand and offer to appear whereever his audience are. In this case, an article on the McGregor Vs Mayweather fight scheduled for August 26th.

Think about your own usage, the ads you click on, the posts and articles you engage with – you simply don’t click, don’t take action unless you have some level of interest in that content and learning more about it.

As a result, every single person being added to your digital patch, regardless of the content they’ve engaged with, has some level of interest in real estate. From there, you are able to re-market to them and further filter them through to buyer and seller calls to action.

It’s this digital patch that will become the dominant focus of successful agents moving forward for three core reasons: 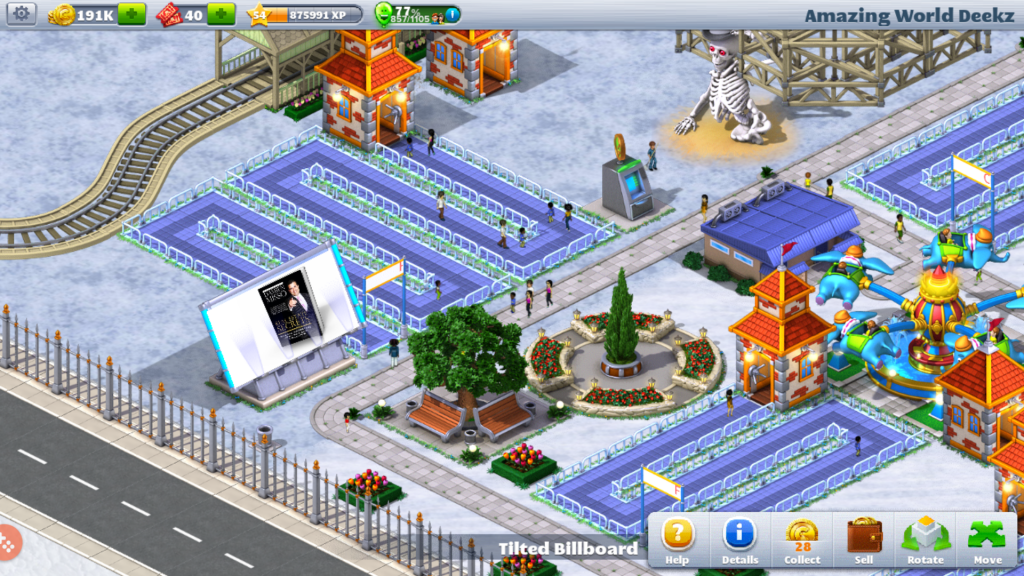 But none of this is speculation – this concept is already being implemented by FBM Academy students with stunning results being produced regularly, in the form of consistent leads and massive lifts in personal and corporate brand recognition.

With 16 million Australians on Facebook each month and more capability to automate, target and market to these people, being put in the hands of agents every single day – Facebook is redefining the “Farm Area” at a rapid rate. It’s not easy being cheesey, even less easy being yourself in a world full of perfectly posed photographs, video editing and status updates so manufactured that they could be American cheese slices.

The delicious irony is that in a world where we have more ways to connect with other human beings than at any other time in history, we are craving genuine, authentic connection and we’re not getting it.

It’s one of the first things I try to instill in my real estate clients when I’m training them in Facebook marketing – be authentic.

Invariably the question always comes up, “Should I do/say/be X?”

The answer, at least from me, is always “Be yourself, be true to you. You won’t be everyone’s cup of tea, but you’re not here to work for everyone. You have limited time and limited energy, so work with the people who will genuinely connect with who you truly are.”

So it was a massive reality check for myself as I started my own “public figure” Facebook page back in May. It may seem a little odd that I didn’t have a “Public Figure” page before now and that’s a fair statement. The reason lies in my love of being the ninja behind the scenes and is no doubt, heavily influenced, by my two decade long battle with PTSD. But sometimes in life, things happen that change the status quo. In my case, its a chronic illness (afflicting my sister) that requires a hell of a lot of money to treat. The best way for me to help, is to hold training workshops where all the funds are donated to help fund medical treatment.

This also line up perfectly with my intrinsic belief that Facebook marketing is the way of the future for Real Estate – in fact, agents who learn to master it will thrive without the need to rely on the portals.

So out from the shadows I stepped, taking off my ninja mask and changing it up for the professionally polished image of a “Facebook marketer.” This image, was based off what I had seen was the common image presented by every Facebook “guru” in my feed.

For a week, it sat like that – my about/story/profile description and images all an imitation of what was out in the market place and a poor imitation at that. Its just not who I am.

I am not polished or hardcore, cookie cutter professional in the old-school IBM Salesman kinda way. Nor am I polished and well rehearsed in the snake oil salesman pitching his wares kind of way.

I’m raw, authentic and rough around the edges. That has nothing to do with my ability to get results or the effectiveness of my marketing (Hell I’m one of only a handful of Facebook certified marketers in the country and the only one I know of specializing in real estate) – but it has everything to do with how I should be interacting with my target market.

I had fallen into the trap that most of my clients fall into. I had completely ignored my own training and my own wisdom on the subject and started out trying to “be a Facebook marketer” instead of being me. 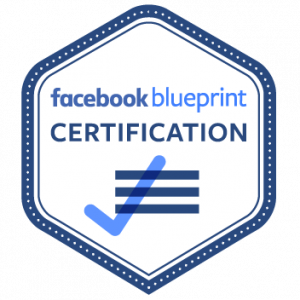 This badge verifies certification and you can click through to verify the person and the skills it certifies.

For a week, my stomach churned and I felt anxious and out of sorts about my page. I couldn’t put my finger on it, not until I was doing school run late last week and it hit me like a bolt of lightening.  I suddenly knew why I felt so horrible about coming out from the shadows and removing my ninja mask. I wasn’t being me.

I’m the guy you’re most likely to catch wearing a LIVIN T-shirt instead of a suit. (LIVIN is an amazing non-profit dedicated to breaking down the social stigma about mental health issues and spreading the message “It ain’t weak to speak.”)

I immediately made changes to my page that weren’t inline with the image of how a FB Marketing professional should appear, but are far more in line with who I am. The last thing to update is the profile image. As much as I love the black and white professional photograph, its not who I am. It’s the American cheese slice version of who I am.

Besides, I’m not wearing a LIVIN T-shirt and that’s pretty much all I wear these days!

When it comes to your own marketing, don’t try to be someone you’re not, don’t try to fit a mold or an image. Just be you and know that anyone who doesn’t like that, was never destined to be one of your people anyway. I can say that now, with an even greater understanding of just how damned hard it is to stay true to you – but no matter how hard it is, do it anyway.

It’s like that internet meme says “Be yourself; everyone else is already taken.” – Oscar Wilde 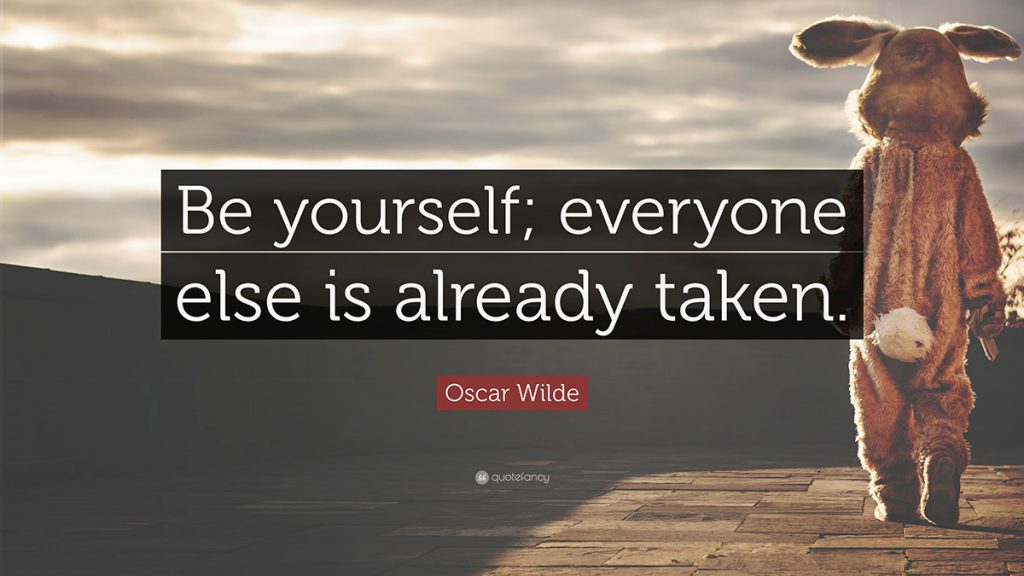